And what, you may ask is a ‘CC&B’? Cut Crease [eye design] & Block [eyebrow]- you know the look which has dominated social media for the past 4 years?

Like most social media crazes (like extreme contouring and oil pulling), we can thank the Kardashians for this one.

Makeup artists know this look well and it’s currently the most requested look from clients; it always gets the ‘likes’ on ‘the socials’ (social media); and for most makeup artists, this trend needs to hurry up and pass!

I’ve been described as transient:

‘a person who is staying or working in a place for a short time only.’

I know I’m not alone here, loads of creatives can probably relate to that description! So how is someone like me able to do the same job and love it for so long?

For me this often means pouring my whole self into my artistic work by tapping into another part of myself and the uniqueness of either my client or a character I’m creating, and then expressing that on their own personal ‘icon’ – their face.

It’s a powerful and moving thing for me, not just another beauty makeup slapped on the face, but a place and time where I tap into something else. This may sound absurd to some, even self indulgent, but because of this experience each time I work, to this day, I still love doing makeup.

This is my art form and as the iconic pro Mua @thealexbox coined the phrase, it is #artfromtheheart

So how does it feel when so many clients, each new makeup student I meet and most of the attention on ‘the socials’ is focused on one look, rinse and repeat ‘CC&B’?

I first saw a CC&B done beautifully by a co-worker about 12 years ago, he was and still is an awesome drag performer and we were working in retail together on a makeup counter; he smashed out this look for a girl’s 21st and I still remember the Smokey chocolate brown blended up from the socket and the vivid sparkly dusky pink on the lid brought up to the crease, he’d custom made by mixing a shimmery pigment with a sealant – it was stunning!

I then did some research and realised that this look dates back at least to the black and white screens of the 20’s and was used to enhance actresses eyes.

This makeup trend, like all the trends was started by makeup artists – but what makes CC&B stand out, is how popular it’s become and how it has redefined the way the populous perceives how makeup ‘should’ look and what is beautiful.

Don’t get me wrong, all trends get their time in the light and shape the public perception of glamour and beauty, like the vintage looks of the past. Ten years ago I felt like if another client asked for another Smokey Eye, I might just cry 😂…

My point is 1 cookie cutter mould for makeup cannot suit everybody’s style or facial features and cannot define what is beautiful – and neither should it.

What I do love is that this trend has brought so many new people to makeup, to our beloved industry, to become makeup artists and spread their own beautiful art.

So to those of us who are truly over it I say: CC&B is just a trend and like all trends, it too shall pass!

To the devotees of CC&B I say: it’s worth knowing and experimenting with other styles, pushing the boundaries of your art and comfort zones, to find your own unique style and maybe stumble onto the next big trend.

Being creative seems to be a thing you’re born with and only a select few are blessed with this gift… but I call bull. Anyone can find their inner ‘creative’ and I’ll share the secret of how.

The story goes that a young woman ran up to Picasso in a park and asked him to draw her something. He promptly drew her a beautiful piece of art on a bit of paper, handed it to her and said, “That’ll be $10,000”. Shocked she said, “But it only took you 30 seconds to draw!”, he rebutted with, “No, it’s taken me 30 years to draw this beautifully”…

The term ‘Being creative’ can mean so many things, like people who:

Are a Genius at science

This list of gifted individuals with amazing skills could go on…But what if instead of focusing on the ‘creative’, we focus on the ‘being’ instead?

Inspiration is for Amateurs

So often (particularly being an educator) I hear, ‘I’m just not inspired’, or ‘I’m too busy’ and these are a total block for coming up with something creative. The reality is that being ‘inspired’ may happen once a year, decade or lifetime, so waiting around for that moment is kind of pointless. Don’t get me started on not having time, I feel and know this one well, the solution ? Schedule time.

For successful creatives the most interesting thing is that once they embarked on a creative path, their existing ‘inspired’ ideas usually get used up pretty quickly – and the really good stuff, comes after! They find that the more regularly they ‘do the work’ of ‘being’ in their creative zone, the better they get at it!

This seems too simple, but in a recent study which looked at Nobel Prize winners’ and compared when they commenced their careers to then they experienced any recognition in their chosen fields (art, science, writing etc.) the trend in all cases was that there were 10 or more years of work, coined the ‘10 years of silence’ prior to achieving any success.

Finding your inner ‘creative’ need not be impossible, unattainable or intimidating – you just need to do the work.

For me it almost feels like there’s a ball of yarn and within the ball there are ideas to tap into, I just have to tease out a thread from that ball and start unravelling – and follow that thread, keep unravelling that ball until the thread turns into a full blown idea – and then see that idea through, express it fully and completely.

The idea gains its own presence or identity – a creation – give your creation the permission to be: itself; imperfect; unique; to be bad; or to be good; amazing; whatever it is, don’t judge your creation too harshly, the main thing is that you ‘created’ it and you did the work!

The trick now is to do it again, and again…

‘The curves of your lips rewrite history’ -Oscar Wilde

This blog is all about lip makeup, tracing it’s evolution from the 20’s, to beetroot stained lips in WW2, to the 50 shades of Kardashian nude of today, to explore the idea of whether any trend is really ‘new’.

London Fashion Week Autumn/Winter 17 had my interest piqued by the ‘on purpose smudgy lip’ trend. Val Garlandhttps://www.instagram.com/thevalgarland (VG) created and dubbed it the ‘snog-mouth’ look (i.e. been snogging all night) to rebel against the “boring perfection you see on Instagram these days… imperfection is modern”. 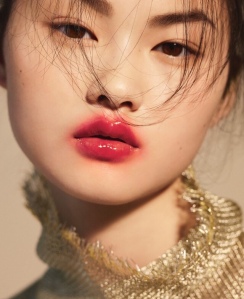 Indeed, I couldn’t agree more, I LOVE the nonconformist and provocativeness of this look, it’s the total opposite of the crisply lined, symmetrical, ‘perfect’ lips we had to master at makeup school..

Creatives know that history is the ultimate ‘influencer’, but was ‘snog mouth’ brand new? To fully appreciate where current lip trends come from, we must go down lip history lane because it all started a long time ago.

Rewind to the start of the C20th..

The roaring 20’s were all about jazz, prohibition, bootlegging and ‘flappers’…

Flappers were a generation of young Western women in the 1920s who wore short skirts, bobbed their hair, listened to jazz, and flaunted their disdain for what was then considered acceptable behavior. (Wikipedia)

Love-heart shaped lips we’re made popular by starlet Clara Bow and brooding colours of burgundy, merlot and plum in the coveted ‘Cupid’s Bow’ shape, were what every flapper wanted. Lipstick was a powerful symbol of rebellion for the new feminist movement. This iconic style has inspired countless Haute Couture looks for Dior, Chanel and Galliano; our current love of vampy lips harks back to then. 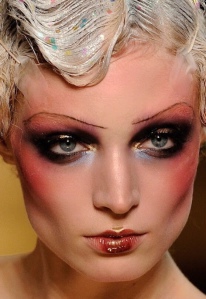 Skip to the 1940’s overdrawn lip – everybody was doing it then, just as now. During WW2 women were encouraged to show their patriotism by wearing bright red lipstick and sending pictures to their sweethearts at war, to keep morale high. This gave rise to wartime

lipsticks like Helena Rubinstein’s ‘Regimental Red’. When resources were scarce, women turned to beetroot and red onion skins to colour their lips rather than succumbing to ‘war face’. The 40’s lip screams confidence, strength and pin-up girl sex appeal. Another iconic lip look representing what was happening for women who at the time started working in factories and other traditionally male dominated roles, while their menfolk were at war. 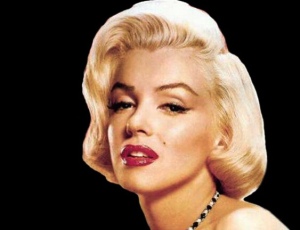 The 50’s lip was a lot like the 40’s but much more conservative (as were the times post WW2), attempting to look ‘smiley’, innocent and coquettish by tapering the fall from the Cupid’s Bow to the corners. This look is timeless, feminine and has remained popular to this day. 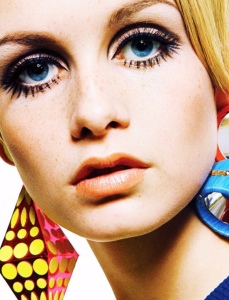 50 shades of Kardashian nude is an understatement, but well before Kylie’s Lip Kit, (circa 1998) most of us were just using concealer as lippy. Nude lips stem from the 60’s and 70’s when pale, nude or glossed lips ruled supreme.

The 80’s were the era of excess and futurism and makeup was no exception, looking as bold and strong as the shoulder pads that accompanied it. Lips went back to being vividly coloured and voluptuous once more. Capturing 80’s sentiments but in a modern way is Vlada Haggarty MUA with look after look of textured, studded, metallic, colourful macro-shot lips dripping with metallic gloopy glossy goodness https://www.instagram.com/vladamua

The 90’s: no one left home without a swipe of brown lipstick during a time when ‘indie’ wasn’t just a music genre but a movement and there is very little photographic evidence… Then it hit me – ‘Snog Mouth’ also had another adjective: ‘grungy’.

is a throwback to the 90’s but with a mix of Vintage colours and coquettishness. VG had created something truly new and it stands out because like lip trends of the C20th, it reflects what is happening right now by rebelling against ‘Instagram perfection’, an idea captured perfectly by The Alex Box:

By taking Snog Mouth to the runway, VG ensured that this look would permeate out and gain momentum: